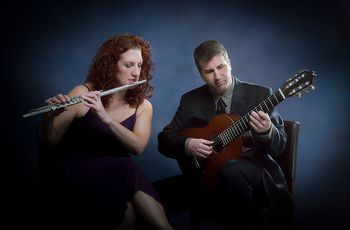 Stacey is a native of Danville, Illinois. After moving to the east coast she received her B.M. in Flute Performance at Temple University as a student of David Cramer. Previous teachers include James Scott, Kate Lukas and Gerald Carey.

During her time as an undergraduate, she was Principal Flute of the Haddonfield, (NJ) Symphony, under the baton of Alan Gilbert. She has performed in masterclasses with Julius Baker, former Principal Flute with the New York Philharmonic, and Alexa Still.

She is a member of the National Flute Association and the Flute Society of Greater Philadelphia.

In addition to her musical pursuits, Stacey is employed as the Pastry Chef at the Institute for Advanced Study in Princeton, NJ. She lives in Ewing, NJ with her husband.

Mike's first influence was his grandfather and while in high school studied jazz guitar with Harry Leahey. He received his B.M. in Classical Guitar Performance from Northern Arizona University while studying with Thomas Sheeley.

After moving to California, Mike began his graduate studies in jazz guitar at San Diego State University where he studied performance with Art Johnson and composition/arranging and theory with Rick Helzer, ultimately earning his M.M. in Jazz Studies.

Soon after he joined the faculty of Southwestern College in San Diego while also running a private teaching studio in the area.

While in California, Mike also played throughout the area with several rock/pop bands and in various jazz groups, classical ensembles and pit orchestras.

Currently, Mike is an Adjunct Professor of Music at RVCC in NJ while also teaching privately and performing in the area. Other interests are composition and the recording arts, examples of which can be found on his personal webpage. He lives in Hillsborough, NJ with his wife and two daughters.